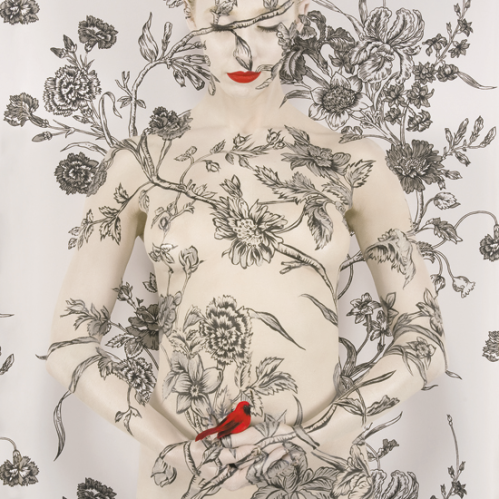 Today I went for a wander around the Galleries, and I dropped in on Catherine Asquith Gallery and saw the works of Emma Hack.  I had seen Emma’s work appearing in different media before, but this was the first time I had seen her work in person.  It is magical, she actually  paints the bodies of the models in front of the image then photographs the finished image.  She uses a lot of Florence Broadhurst Wallpaper as her backgrounds and paints the models into it. 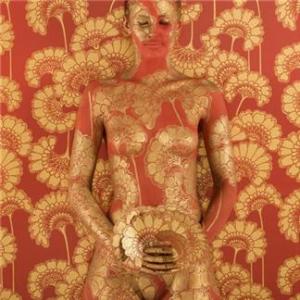 Florence Broadhurst is another favourite designer or mine, she was this amazing Australian woman who lived an outrageous life and ended up designer the most superb wallpapers in the 60s and 70s when she was in her 60s herself.  They were very popular in her day and have been re-released in the last few years and are as popular again. 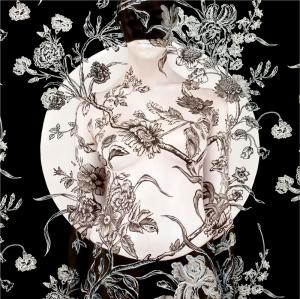 In the pictures below Emma has used real animals in the works, such an amazing blend of painted, printed and real. 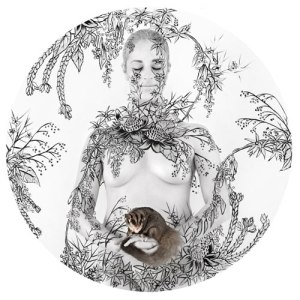 This is Emma’s most recent work, after a trip to Spain and Portugal she painted an image of the tiles she had seen and them painted the model into the picture, 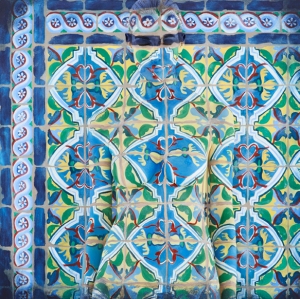 Emma also did the body painting in the Gotye film clip (click to see a range of videos on how she does her work, fascinating) which was very popular here in Australia and did an amazing ad for safe driving campaign, see the film clip on how it was made, fascinating procedure.

Hope you enjoy this amazing and different work as much as I did.

Posted in What inspires me 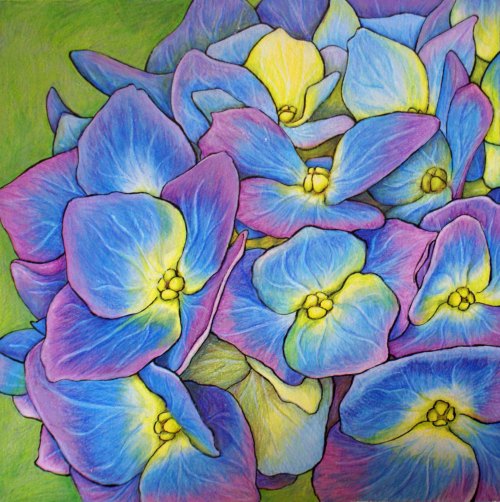 I have gone back to the first Hydrangea and added the petal veins (I think that it what you call them) into it.  Sitting it beside the second Hydrangea painting showed how necessary it was and I am very pleased with the result.  I can tell you I was very nervous painting on the white viens, hoping that I was not about to stuff the whole thing up.  Sometimes you really have to be very brave as an artist.  I painted the veins on in white paint then went back over them in pencil to knock them back and work them into the painting.

Making this change has sorted out a couple of problems for me.  The colours had dominated the picture and it was a little rainbowish.  The white veins have broken the colour up and given more movement and definition to the petals and little flowers.  It has also given them a more crinkled look and it sits much more comfortably with the second painting in the series.

Here is a comparison of the two together for you. The second photo is much better quality than the first. 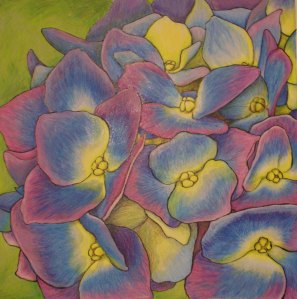 I have started the third one which will be more purple, I have given you a sneak preview of it though it is just at the underpainting stage.

I am still keen to do some more 3d work, but I will keep focused on this series and not get distracted.  So I am being good and strong, till after these last two are done, then I will have a little play.

Here is the second in the Hydrangea series.  A more pastel rendition this time, not a colour palette I am used to working in, so a challenge in itself.  I added the veins into these petals, not sure if I am going to go back and add them into the first one.  I will wait until I have finished the series before I go back and do the last fiddle with them all.  I would like them to work together as a set, but we will see as they are completed as to how cohesive they are.  The area on the right behind the petals needs some work, just not sure what to do with it yet.  it seems too pale, I may make it darker, just need to ponder on it for awhile.

I really like the details in this painting so I thought I would share with you some of my favourite bits.

In my previous post I was talking about our lovely autumn weather, well I spoke too soon,  It has been hot, really hot for a lot of days now, I think we may go to 10 days straight over 30C  (90F) and today and tomorrow will be 36C (100F).  Now I love the hot weather but this is taking it a bit far.  I will have to go and immerse myself into the cool hydrangeas again.

I am thinking of taking a little detour in my techniques and looking at combining my pencil work, with some paper embossing and creating a little 3D work.  It is an idea I have been kicking around for awhile so I may have something new to show you.  Thank you Karen for your encouragement and Michelle I hope you like this installment.

We are moving into my favourite time of year, Autumn in Victoria.  The heat is still with us, but there is a crispness to the air which speaks of the fine sunny days and cool clear nights.  I have painted one of my favourite summer flowers Hydrangeas.  My mother always had Hydrangeas growing and I loved their great blousy flowers that glowed in the summer shade, reminding me that there were still cool greens around.  But as we move into autumn the blues are touched with a purple as they slowly fade.

This was a great deal of fun to do, it is small for me 30cm square and it was a challenge to move the colours in the petals through from yellow, to blue and then purple.  There are some really lovely parts of this painting where the colours really sing.

My thoughts when I started this was to do four different hydrangea pictures, I am going to start on my second now, so I might make it.