Come for a sketchy walk with me in the sun

Last weekend I went for a lovely walk into the spring bush near Castlemaine.  I know that it isn’t quite officially spring yet, but thankfully the local wild flowers didn’t know that and were blooming quite happily in the sun. 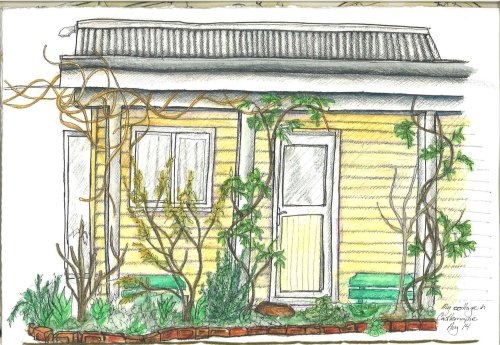 Castlemaine House In and watercolour pencil

So first here is a quick sketch of my little cottage in Castlemaine.  It is a sweet little renovated miners cottage.  They are from the gold rush era and were built piece by piece as the family could afford it.  The first part was a two room cottage, then another couple of rooms were added onto the back.  If the family did really well they might add a brick extension on the front to be all posh facing the street, but mine didn’t get that far.

There is a track called the Gold Fields Track that winds from Ballarat, all the way through to Bendigo (about 300 kms), and it runs through Castlemaine, so I decided to walk along that for awhile.  I had actually got up early, something I think about often, but rarely manage to do.  The sun was shining and I knew the chances of that lasting were slim, so away I went.

The whole idea of going for sketchy walks has been a revelation to me.  I would love to go for long rambling walks for hours, but the hard fact is that with chronic fatigue I am not able to walk for more than an hour and even than I would be exhausted for the rest of the day.  But sketchy walks mean that I can walk for 15-20 minutes then sit down and sketch for 20 minutes catch my breath, re-energise and walk some more, so in this way I can be out for a couple of hours and still be fine.  Of course the dog does not feel that this is the proper way to walk and lets me know every time we stop.

The wattle was out and it is one of the first harbinger of spring.  All of a sudden what were ragged, inconspicuous shrubs are covered with golden pom poms that are just glowing in the early morning light and there is a golden glow in the drab grey winter bush. 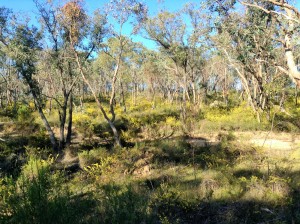 Wattle in the bush

Wattle flowers in the suns glow

Here is my little sketch of the wattle.  The one in the sunshine is Golden wattle, while the little one I drew I think is Gold Dust Wattle.

The next one I sketched was Gorse, not a native plant, but it certainly is very happy here and is often called egg and bacon plant.  This endeavor needed some supervision from Hannah. 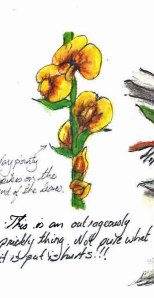 Hannah overseeing the sketching and wanting me to get moving again.

My final sketch was the sarsparilla vine.  Such a beauty in the bush. I like the contrast between the grey bark and rocks and the birght purple flowers and glossy green leaves.

Well. after such fun sketching in the sun, the clouds had come and the wind was suddenly chill and I remembered that it was really winter and time to go home. 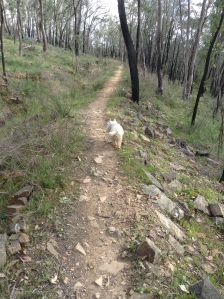 On the way home.

I hope you enjoyed your little walk in the sun with me.

Still trying to catch you all up on what I have been doing, much more drawing than posting has been happening. 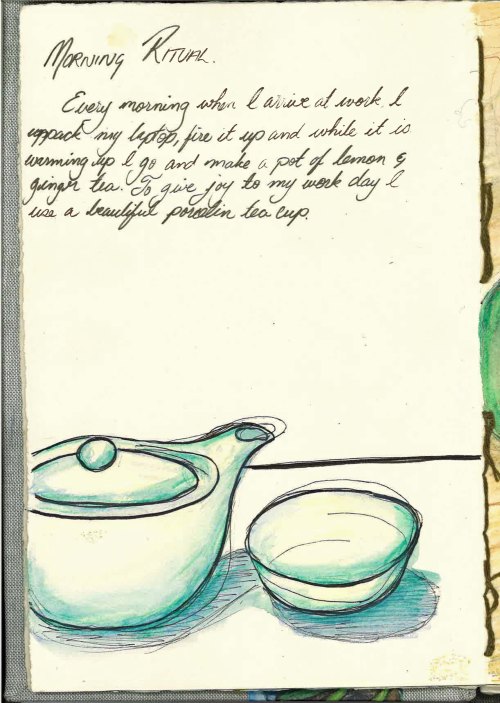 Here are some more sketches that I have done.  One of the Sketch Book Skools assignments was to draw your everyday things and my ritual in the morning when I get to work is to make a cup of herbal tea.  (I usually drink coffee, but to limit my consumption and I have taken to lemon and ginger tea so I can sip it through the morning or until my mid-morning coffee.)  As I coffee drinker I was always jealous of the gorgeous teapots and cups of the tea drinker, so when I started on the herbal teas at work I had to have a cute little pot and some gorgeous porcelain cups.  It is the small things that make the working day civilized.

So here is a qick drawing of my cup and pot and then another of a collection of 50s teacups of my mother.  She has the best collection of tea cups.

In my new quest to sketch more from life, I did a few sketches while I was taking my dog for a walk at an old mining area near Castlemaine called Vaughan Springs.

Castlemaine/Daylesford area is known for its gold mining and mineral springs and these were combined at Vaughan Springs.  There is a lovely park there were you can walk along tasting the different springs, they are all supposed to taste differently, but I am not a connoisseur and they all taste pretty awful to me.

We walked along the creek for a little while until we came to Central Spring, so I did this sketch of the spring pump beside the stream.  Hannah went hunting through the undergrowth trying to catch some rabbits.  She wasn’t too impressed by the halt to her walk and kept coming up and putting her nose in journal, then huffing and heading off on further adventure.  Its a tough life for a dog putting up with all these silly human notions that spoil a good walk.

On the way back we passed by these fir trees in ‘flower’ just laden with pollen, I couldn’t resist tapping them to see the pollen fly and that was so much fun I tugged on the branch and was nearly engulfed by the pollen.  Not such a great idea I didn’t stop sneezing for the next 10 minutes.

When I got home I did the sketch of a Douglas fir cone I found on the way.  I just love sketching, and just don’t know why I don’t do it more.

Posted in 2014 Artwork, Journal, What inspires me

Sketching with the Urban Sketchers

I have started another online course called Sketch Book Skool which has been a lot of fun.  So I have made a new sketch book for it.  As part of the course you are encouraged to go out and sketch, so I met up with the Melbourne ‘Urban Sketches’ and we drew in one of the lovely Victorian Arcades in the centre of Melbourne.  A really pleasant way to spend time.  We met up, then everyone dispersed throughout the arcade and did a couple of hours of drawing then met up again to see what each other had done.  Then off to lunch and a little more sketching.

This was my first time sketching in the middle of town, but I found it to be really rewarding.  I bought a little stool and set myself up in a corner of the arcade and went to work.  Most people walk by with the quick glance, some stopped to chat and some children were fascinated.  I enjoy talking to people about what I am doing and they were all very kind.

Circumstances have been against me and I haven’t had a chance to go drawing with the group again, but I plan to do so in the future.  I have been doing more sketches and I will share these with you in coming posts. 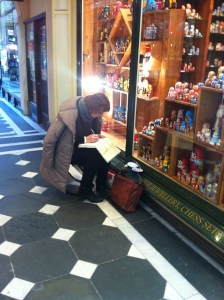 Sketching in Royal Arcade, it was very cold that day.

This was a quick little sketch of a Babushka Shop in the arcade.  Yes the whole shop is full of these little babushkas so I could not resist doing a quick 10 minute sketch of the window.

I would recommend Sketch Book Skool to others who would like some encouragement to start sketching, it is a nice mix of instruction, getting to see different sketchers and their styles and motivation to get out and sketch.

Posted in 2013 Artwork, Journal, What inspires me

They are all done at last and I spent yesterday hanging them in the Small Works exhibition at the Brunswick Street Gallery.  My first works in an exhibition.  Very exciting and a little nervous making.  If anyone is in Melbourne you are all inviting to come.

Here is the final one, it took awhile to finish as I had some problems with it and just couldn’t get it to work.  I think I was over thinking it and  just took it back to basics and it finally came together. 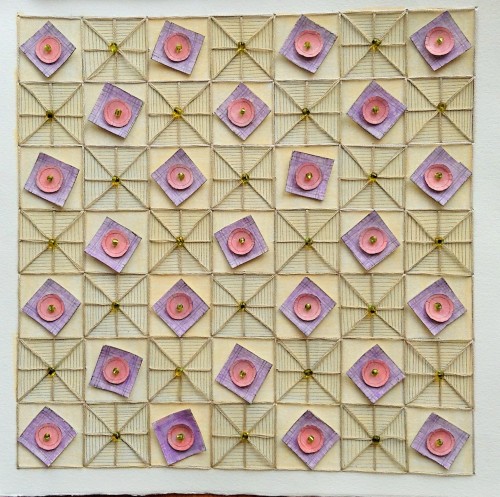 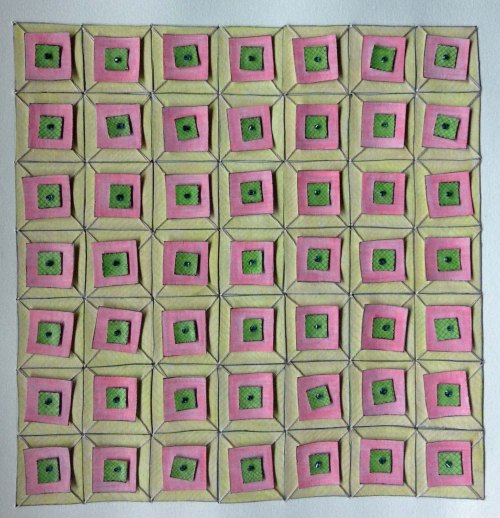 I think my favourite is no 5 with no 1 coming a close second, I like the smaller pieces.  Well hope one of them sells!