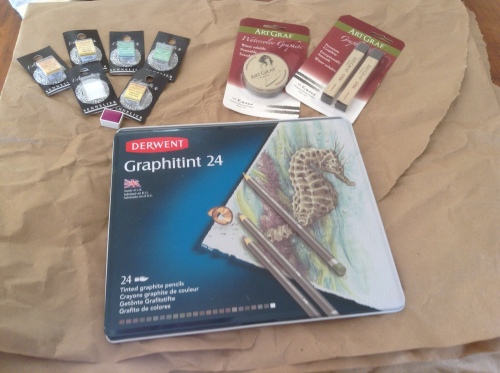 I have finally received my package of art supplies,  I used a Christmas voucher to buy it but took ages to decide what to buy.  So I thought I would share my little treasure trove of art goodies with you.

Not pictured here but one of my favourite supplies is my Lamy Safari Fountain pen.  I have used it in my latest sketches and I am totally hooked.  Finally a fine inky line and a pen that does not die on my harsher watercolour/printmaking paper that I made my journals out of.  It will also go over coloured pencil, yippee!  I can’t tell you how many fine liner pens I have massacred, they don’t last more than a couple of drawings in my journals and they are killed by all the wax in the coloured pencils.  Plus there are different nibs and a whole world of inks.  The people at Goulet Pens have the best site and great YouTube videos to truly entice you into the world of fountain pens, plus they give you lolly pops in each order!  I am so easily bribed with food.

I also bought the new Derwent Graphitint pencils.  They are coloured graphite and although the colour range is a little limited, they have lovely subtle colours and they are water soluble, so work in well with the Derwnet Inktense that I already have.

There is also some more Sennelier water colours to complete my set which I purchased before Christmas.  They have honey in them so a very creamy.  I don’t have much experience with water colours and this is the first set of professional paints I have bought, so not sure how they compare, but I am happy with them. I just need loads more practice to get proficient with them.

I also had to have some  water soluble graphite that Anna Warren has been using (see here), so I bought a couple of sticks and a tin.  I have not played with them yet but am looking forward to trying them out. 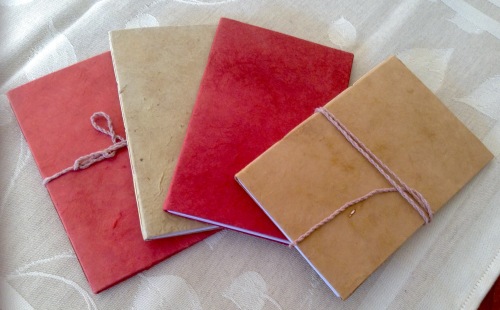 The set of finished notebooks

A couple of weekends ago I found enough time and energy to make some little note books that I had been meaning to do for ages.  I wanted to get back into some book binding and to use the paper that a friend had brought back from Sennelier Art shop in Paris for me. 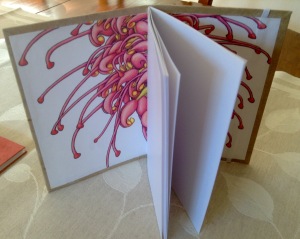 The set of finished notebooks

I had brought some of the same paper on an earlier trip to Paris and hadn’t been able to bring myself to use it, although I would bring it out and admire and pat it on occasion.  With the extra my friend bought and the possibility to get more I thought it was time to get brave and use them.  The idea of using the paper as covers for sketch books seemed a great idea and I was itching to have a go.

These are small (A5) size and I wanted to give them to some friends who would not necessarily use them for sketching but would be writing in them.  With that in mind I used some lighter bleed proof paper. 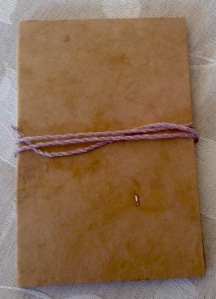 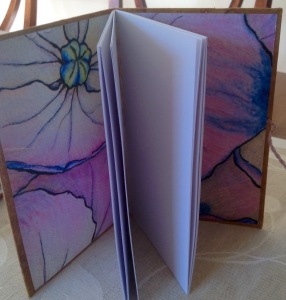 They have light cardboard covers that I covered with my special paper on the outside and used some photocopies of my drawings on the inside for a pop of colour.  The binding is a simple saddle stitch, it really could not be easier to make a book.  I gave them all different closures to mix things up. 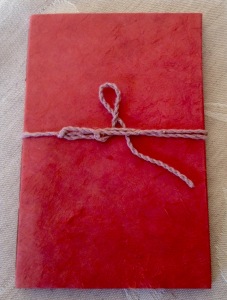 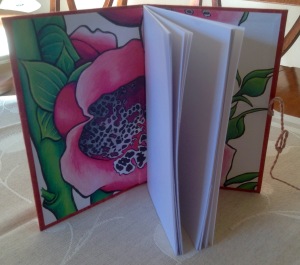 So please with my few hours work and happy to have such useful little gifts. 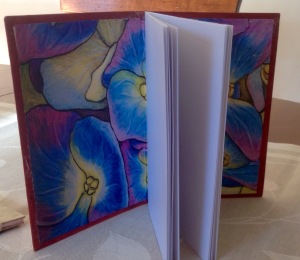 Posted in 2015 Artwork, Art Materials/Supplies, Journal, What inspires me

The Start of Spring

As promised here is a picture painted with my lovely new brushes and a picture of the brushes.  I thought I would quickly post it now before I head off on holidays and forget. 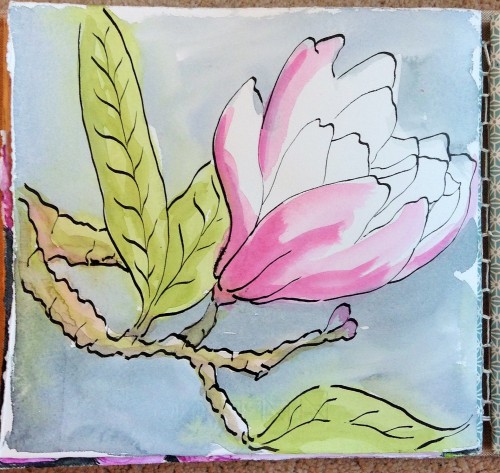 In Australia we count the seasons a bit differently than other countries, we do it by the calendar not by the equinox.  So for us spring starts on the 1 September and lasts three months until December.  It has certainly been spring this weekend, with the most gloriously warm, still and sunny days, that just make you want to stay outside and soak up all that lovely warmth and sun.  So I wanted to do a spring picture for my Season of Colour Journal and it needed to be fresh and lively like this spring weather. 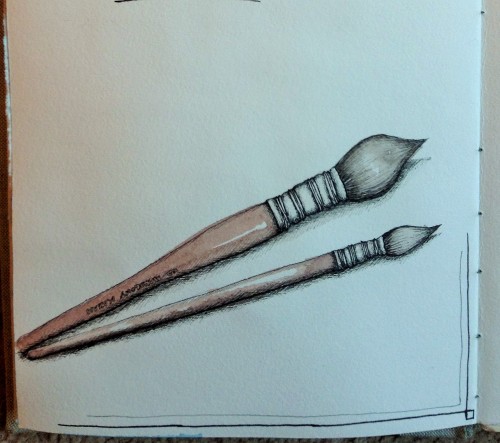 So I went for my latest medium of choice water-colour and my ever so fabulous new Japanese brushes.  These are art works in themselves and a very welcome birthday present from my brother, it is so convenient that he lives near some quality art shops.  I have heard about these lovely brushes which are very fat, but come to the most sublime points.  Mine are Kazan Mahogany mop tops no 6 and no 2.  I was surprised at how big they were but they just glide across the paper.  I tried to work quickly and spontaneously and lay the colour down, then went back over it with a dip pen.  I am tempted to do a little more detail, but keep telling myself to walk away.

So for all of your out there sliding into fall, here is some spring sunshine.

All the Art Supplies arrived at Once 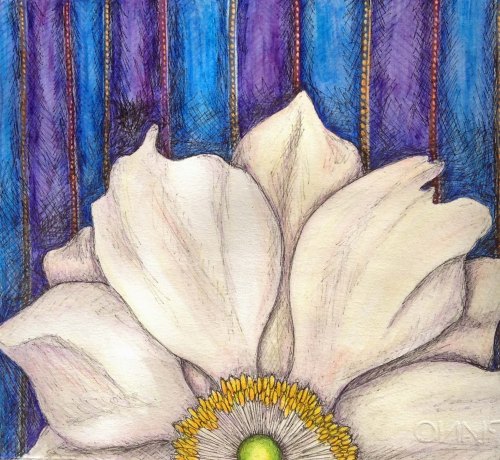 I am in the happiest of dilemmas, all my art supplies have arrived at once.  My Caran d’Arche pencils have finally turned up, (the first set never arrived) and I have been waiting for them since Easter!  Then the new watercolour pencils came as well.  I spoilt myself and bought the rest of the Prismacolor, I had the 24 set and I also ordered the Derwent Inktense set of 36.  That makes over 130 new pencils.  Of course they arrived while I was away on holidays, but my very kind sister came to visit and couriered them to me.  Isn’t it nice when your family understands your obsessions. I started playing with the watercolour pencils first and of course did my colour chart.  I was very happy to find that the colours of the two sets did not overlap much.  The Prismacolors are more subtle and paler, while not surprising the Inktense are brighter and darker.  They compliment each other well. 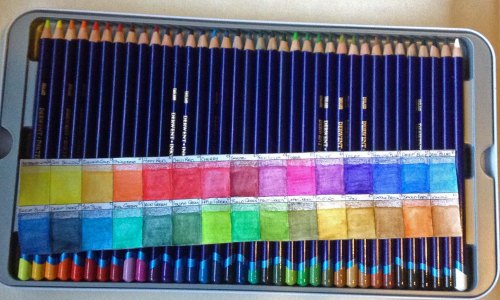 I have only just started using the Inktense, but already I have found them not as soft and creamy as the prismacolors and are a little sractchy, but the colours are lovely and I will have to try them on some different paper to really give them a work out.  The paper in my journal is really printing paper and is too soft for drawing on. 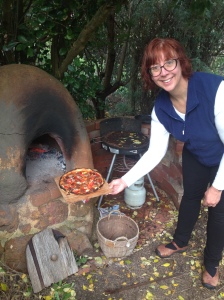 I am staying in a little house in Dean’s Marsh again with a lovely cottage garden and a little wood fired oven.  So to thank my sister for her pencil delivery I fired it up and made my first ever wood fired pizzas.  Here is the chef in action, apart from a little char on the edges they worked very well.  We had a lovely lunch in the garden. 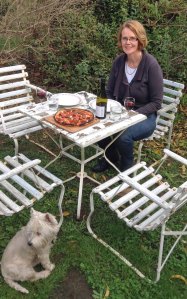 The wind flowers are out one of the few flowers blooming at this time of year, they are so lovely, I did the drawing of one in my journal and my sister took some lovely photos of them. The background of the windflower is done with the inktense pencils while the flower  is with the prismacolors.  You can see how intense the Derwents are, they really do live up to their name. On to the other pencils soon, don’t want to rush the pleasure of playing with my new toys. Karen

Posted in 2014 Artwork, Art Materials/Supplies, Journal, What inspires me

Pencil Case – a fitting home for my new pencils 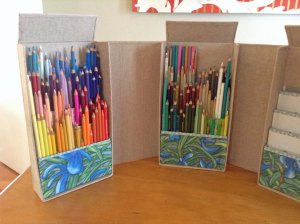 Here is the new pencil box I made over the Easter break.  As I said in my previous post, I went a little crazy and bought more colour pencils.  I already had the large set of prismacolor pencils and I bought the extra 18 pencils that they brought out a while ago.  Then I went mad and bought the large set of Caran d’Arche Luminance pencils, so I now have to house 214 coloured pencils and I wanted them all in one place.  The only answer is build my own pencil case.

I had been considering my options and had thought of trays of colours in a box, like my tin for the prismacolors, but I found that the trays were messy to spread out.  I wanted to see all my colours in one glorious array.  So I went back to how the old Derwents were packaged in the staggered, folding box.  The prized box of 72 Derwents, my heart desire as a child, I never did get them in one box, I saved my pocket money and bought them one at a time until I had the full set, but never got the box purchasing them that way.  Clearly I am making up for a traumatised childhood! 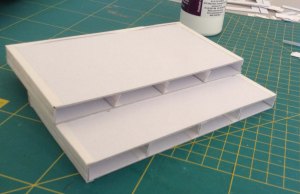 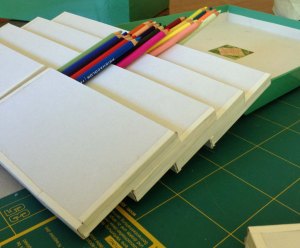 Stage 2 – Putting the dividers together

I  needed three boxes though and ended up with the capacity for 240 pencils, enough to allow for extras.  I made them out of four rows of twenty pencils with four compartments of five pencils in each row.  I made the rows and glued them together, each one offset by 4cm.  Four of these made up my three boxes.  I then made an outside box to stick them into and then covered them in bookbinding cloth with side bits that would wrap around each other so the became a box and I could store them and most of all take them with me.  For extra trickiness I cut little hatches in the back where there was a gap so I had a place to keep extras like sharpeners, pencil rubbers etc. 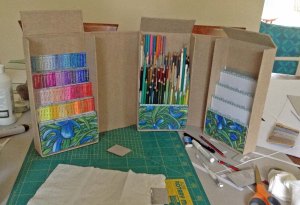 Stage 3 – Dividers into the folding boxes

I am really happy with the results, it is a bit stiff and doesn’t roll up completely square, but some of this will work out with use as it softens up.  The fact that it stands solidly on its own, means that I have all the colours in front of me which is handy.  I made little colour charts for behind the pencils, as I like them to go back into the same place. 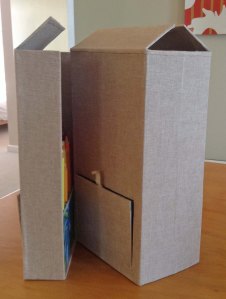 I am just waiting now for the Luminance pencils to arrive from England and I can complete it.  You may still get an update on it as I haven’t completed the closures and I will need a new colour chart to include the new pencils and perhaps some decoration on the outside.

Time to play some more with the contents.

Posted in 2014 Artwork, Art Materials/Supplies, What inspires me