New sketches from my Sketchbook 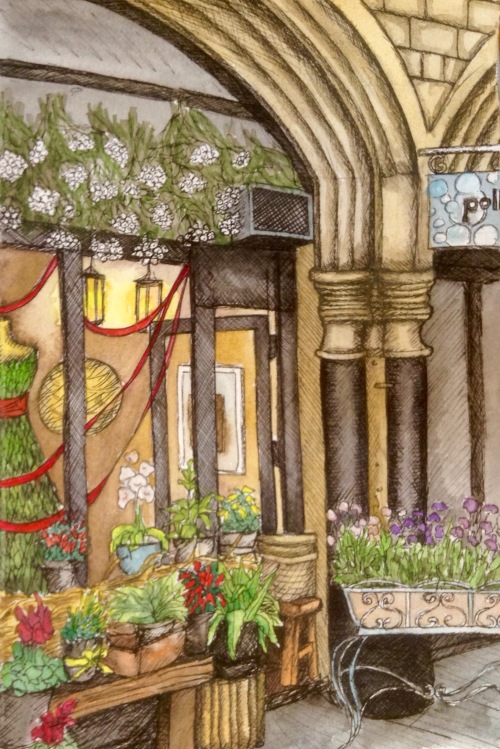 In the last post I did a look back at what I had been doing in my sketch books, so I thought it would be a good idea to show you a couple of my drawings that I have just finished.

The first one is of a florist shop called Pollen which has the most stunning displays, always a joy to go past and its setting is lovely.  It is in Flinder’s Lane which is one of the trendiest lanes in Melbourne.  A lot of the best restaurants are tucked away in this lane and walking down it is always a treat.

Melbourne has become world renowned for its colourful laneways full of one off, cutting edge bars and restaurants, bespoke little shops and the really high quality graffiti.  Melbourne council made a decision years ago to grant licenses to little hole in the wall venues in the CBD and all of a sudden the laneways which where dirty, smelly and a place you wouldn’t go down, turned into vibrant bar and restaurant precincts full of small and quirky venues.  Instead of harassing the graffiti artists they were embraced and encouraged to work in certain locations.  Melbourne is now consulting with other international cities on how to conduct urban renewal.

Example of some of the graffiti in Melbourne

Ok, so back to the picture, Pollen the florist is tucked into the old chapter house of the large sandstone Anglican Cathedral, hence the beautiful of arches above it.  It looks like in could be in the back streets of Paris.  I am getting fond of the dusk lighting when there is still enough daylight to see, but the lamps begin to glow.  it has brought out the pop of the white and other coloured flowers and given depth and a bit of mystery to the picture. 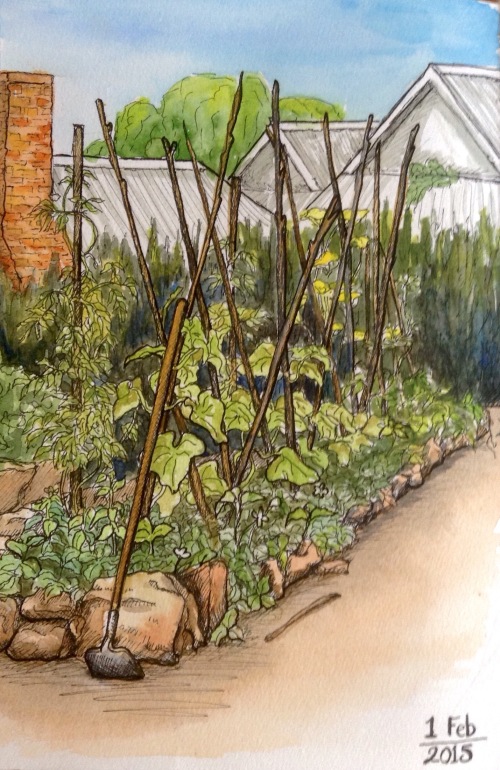 My other picture is of a lovely cottage garden in the country at Castlemaine.  It is also in an historic setting as the cottage in the back is one of the best preserved miner’s cottages in the district.  It is called Tute’s cottage and is was built in the gold rush in 1860s and since 1922 was lived in by the same family until 1997.  The last woman to live there must have been very tough to live in such primitive conditions as very little had changed and very short.  The doorways are tiny, they must only be 5’7′” high.

The garden has been replanted to replicate a gold mining garden and is being maintained as a community garden by a group of residents who live across the road from it.  It is a fantastic and productive garden full of heritage varieties.  This is my idea of a perfect vege garden, structured but still loose, no formal rows and lots of inter-planting.  Good height variety with the home-made trellises made from the fruit tree prunings.  I think Peter Rabbit would have been very happy here.

I thought I would show one of the first sketches I did in my book, it is nice to look back and think that I have improved.  They were both down in the same time frames, about 90 minutes on site and the same amount at home to finish the drawing and add the water colour.  I can sure fit in a lot more detail now and am so much more confident.  Sketchbook Skool courses have really helped me to develop my skills.